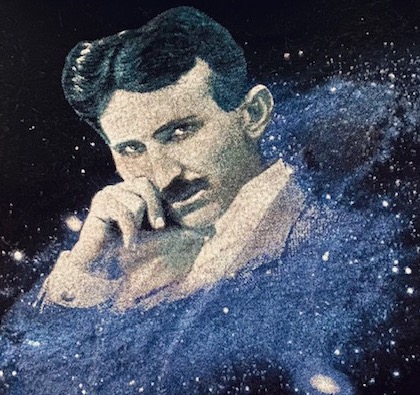 Before and after Nikola Tesla’s death, a group of mysterious individuals showed up at his room in the New Yorker Hotel. What did they want? Who, exactly, were they? And what happened to Tesla’s files after his death? Some sources say the government classified Tesla’s research in order to keep anti-gravity and free energy technology out of the public domain. No matter what happened, it’s clear his death is surrounded by high strangeness, and even stranger people.

Late December 1942, Ralph Bergstresser, an OSS member (precursor to the CIA) and Bloyce Fitzgerald, a ballistics expert at MIT, visited Tesla. They claimed Tesla agreed to share his most sensitive material with them. On January 8, 1943, the White House hosted a meeting with science advisors and military officials regarding this sensitive material. Bergstresser and Fitzgerald said Tesla was too sick to attend. (Tesla died January 6 or 7, 1943)

George H. Scherff, Jr., according to a large field of completely disputable sources, allegedly became the 41st President of the United States as GHW Bush. His real father was allegedly George H. Scherff Sr. and his adopted father allegedly Prescott Bush. This long and winding story would make a terrific movie if false(and I hope it is), or an absolute mockery of American democracy, if true.

GHW Bush’s U.S. father, Prescott Bush, was a founder and one of seven directors of the Union Banking Corporation (holding a single share out of 4,000), an investment bank that operated as a clearing house for many assets and enterprises held by German steel magnate Fritz Thyssen, an early supporter of the Nazi Party.

In July 1942, the bank was suspected of holding gold on behalf of Nazi leaders. A subsequent government investigation disproved those allegations but confirmed the Thyssens’ control, and in October 1942, the United States seized the bank under the Trading with the Enemy Act and held the assets for the duration of World War II.

Tesla died January 7th, 1943, aged 86. One source says he died penniless and alone. Two alternate sources claim that either the Yugoslavian government or George Westinghouse were covering Tesla’s bills. Still, other sources claim Tesla had plenty of money as the result of secret government contracts.

It makes no sense that the Yugoslavian government would pay Tesla a stipend because he’d been a U.S. Citizen for years. It’s even weirder that the Office of Alien Property, at the request of the FBI, would confiscate what they claimed was a ‘washed up’ ‘has been’ scientist’s research. If Tesla weren’t important and had fallen into ‘lunacy’, why bother? Technically, the OAP had no authority to take any of Tesla’s research since he was a legal American citizen.

The day after Tesla’s death, the government removed research from his room. The Manhattan Storage and Warehouse Company and three other facilities stored Tesla’s papers and artifacts, along with Tesla’s items already in storage since the 1930’s. Under orders from the U.S. government, the collection was sealed by John G. Trump, uncle to the former president Donald. The “cover story” ‘for the people’ was that Tesla never took any notes, so there couldn’t possibly be any missing files.

Officials from Wright-Patterson AFB raced to the warehouses pre and post Operation Paper Clip (When the U.S. Government white-washed Nazi backgrounds and gave them high-paying jobs and positions of leadership, including running NASA) and took possession of all documents, classifying them at the highest level.

Between 1945 – 1948, letters and cables occurred between the Air Technical Service Command at Wright Field, Dayton, Ohio, Military Intelligence in Washington, D.C. and the OAP on the subject of Tesla’s files…a brigadier general took command of Project Nick at Wright, a laser beam or ‘death ray’ experiment allegedly based on some of Tesla’s classified research.

In 1976, Dale Alfrey bought some unopened boxes at an auction for $25. Imagine his shock when he found some of Tesla’s papers. In 1997, Alfrey received a visit by three men he described as a ‘palpable menace’ who demanded the boxes. They took everything and erased his computer too.

But they missed twenty-three boxes. Rumor says, they’re buried somewhere safe in Ohio…but not with the government.