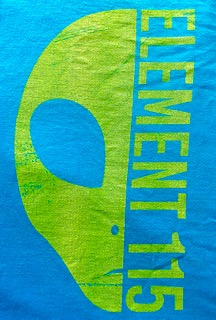 Bob Lazar, an engineer with a gift for propulsion systems, claims he was hired in the late 1980’s to reverse-engineer extraterrestrial technology, at a secret site called “S-4” located about fifteen miles from Area 51.

While there, Lazar claims he was ‘read into’ aspects of ‘alien technology’ and examined alien craft that ran on antimatter, which was powered by element 115. At the time, this element was talked about but not known to exist.

Consequently, on September 10, 2013, an international team of scientists working at the GSI Helmholtz Center for Heavy Ion Research in Darmstadt, Germany reported that they had evidence supporting the existence of element 115. (It is important to note that Element 115 WAS discussed in journals around the time Lazar made his claims.) Element 115 had previously been designated ununpentium, a placeholder name that means one-one-five in Latin. In November 2016, the International Union of Pure and Applied Chemistry (IUPAC) approved the name moscovium for element 115.

But even more bizarre than Element 115, which could allegedly propel spacecraft in perpetuity, was Lazar’s story about having to sift through a ‘clear book’ at S-4, a sort of holographic history of extraterrestrials, that some former governmental sources claim was written by female EBE1, an ‘alien’ from another solar system, or perhaps an advanced human brought back to us from a distant future. Lazar publicly stated that US government briefing documents described alien involvement in human affairs over the past 10,000 years.

Most skeptics agree that Lazar has zero evidence to support his core claim of alien technology, and outright reject his alien briefings as conspiracy theory. They also cry that both his work at S-4 and his education are fabrications. Yet the more loudly his detractors yell, and the more his life is disrupted with federal raids, arrests, and charges, the more questions I have.

Initially, Lazar came forward under the pseudonym “Dennis”. In May 1989, he appeared in an interview with investigative reporter George Knapp on KLAS in Las Vegas to discuss his employment at “S-4”. He wasn’t after money, and he allegedly possessed a governmental security clearance that allowed him into Area 51, the holy grail of both stealth technology and secret alien communications for every military buff and conspiracy kook from here to Orion.

Once Lazar’s identity was outed, he said his job revolved around reverse engineering one of nine flying saucers, all extraterrestrial in origin. He claims one of the crafts, which he called the “Sport Model”, was manufactured out of a strange ‘self-healing’ metallic substance. Additionally, he claimed that his job interview for work at S-4 was contractor EG&G and his employer was the United States Navy; EG&G initially stated it had no records of his employment, until Lazar produced some and forced the company to retreat.

Additionally, universities from which he claimed to hold degrees (Cal Tech & MIT) showed no record of him ever matriculating, and former workplaces disavowed him.

But not so fast…supporting evidence of all of Lazar’s claims did appear. In addition to his Naval Intelligence work at S4 from late 1988 to early 1989, Lazar also worked at the Meson Physics lab, a part of the Los Alamos National Laboratories. The FBI was said to be in little hurry to investigate Lazar’s employment there, even though former Nevada Congressman James Bilbray asked for an investigation after Lazar went public and was accused by the government of lying. It seems government officials still, to this day, scratch their heads over Lazar, wondering how to both deny his employment at Los Alamos and his education and to explain exactly why his name actually DOES appear in old telephone directories of Los Alamos scientists.

Notably, an article by staff writer Terry England in the June 27, 1982, edition of the Los Alamos Monitor, shows a picture of Lazar standing next to a jet car and refers to his employment as a scientist with Los Alamos. Hmmm. The plot (or the deception) thickens.

Consequently, two-dozen Los Alamos employees told Knapp they remembered Lazar.  Some of them said they had been warned not to talk about or to Lazar…and they were afraid, very afraid. Four of them, however, did have the guts to confirm that Lazar had been working with them on classified projects.

After denying Lazar’s employment, Los Alamos finally changed its story, in April 1994. It now reversed engineered its denial and said, ooops, Lazar had been employed there.  Knapp also talked to former employees of the super-secret Groom Lake base, who corroborated Lazar’s description of the place right down to details about the logistics and description of the base dining room, and how meals are covered. And then? BAM! Lazar presented W-2’s to the public. He had indeed been employed by the U.S. Naval Dept. of Intelligence.

When Lazar joined the S-4 Program under Project Red Book, he was instructed to read briefing documents, which  described historical extraterrestrial involvement on Earth going back 10,000 years, from a planet orbiting twin binary stars around Zeta Reticuli, but as of September 2019, no extrasolar planets have been found in this system.

Why would a well-spoken, well-educated entrepreneur such as Bob Lazar risk his life, credibility, and career, with such an unbelievable story about working on extraterrestrial craft or reading briefing materials written by otherworldly beings?

As he predicted, his life has been a mixture of periodic hell ever since.

In 2017, Lazar’s workplace was raided by the FBI and local police, where a FOIA shows he was part of a ‘murder investigation’. Lazar wasn’t charged. But the government seized all of his lab equipment and computers, and he had to hire lawyers for its return.

Prior to 2017, Lazar and his wife, Joy White, were charged in 2007 with violating the Federal Hazardous Substances Act for shipping restricted chemicals across state lines. Sounds horrible, right? These charges stemmed from another company, United Nuclear, under investigation for moving hazardous substances across state lines, namely chemicals to make illegal fireworks. I find these charges laughable given the fact that our own government often moves illicit bio-4 level chemicals across global and state lines using commercial airliners—and thousands of people annually purchase illegal fireworks—across state lines.

Additionally, shortly after going public about his time at S-4, he was suddenly arrested in 1990 for aiding and abetting a prostitution ring. He built surveillance equipment for the business after he lost his job at S-4 and couldn’t get work. His charges were reduced to pandering and he was ordered to do 150 hours of community service and undergo psychotherapy, a perfect recipe for discrediting anyone who thinks the public has a ‘need-to-know’ regarding how tax dollars are spent on alien history books and reverse engineering of spacecraft.

A number of sources that discredit Lazar fail to mention the attempts on his life, including having his tires shot out while driving on the Interstate.

Whether or not Lazar was fed propaganda or was part of some clandestine psyops experiment at S-4 remains vehemently denied/classified. Yet one item in which he was confronted at S-4 was a statement, in which humans were referred to as “Containers”. Publicly, Lazar has never put forth a theory on what this might mean.

I find the statement curious. If humans are “containers”, are we containers of energy? Consciousness? Souls? Or is this a military term akin to “collateral damage”, where human life is reduced to an inanimate level to make war or unethical experiments sound publicly palatable?

Maybe “containers” mean we act as breathing garbage cans for universal waste? Or is the term ‘container’ even more sinister? Perhaps, as some physicists have theorized, we really do “live” in a simulator, pacified by technology or loaded down by labor and the machinations of survival until ‘called up’ as a sort of backup battery to the cosmos. Yet this seems a bit pretentious on my part…as if the cosmos could be satiated by a few billion piddly humans living on the wispy arm of a Milky Way Galaxy. We’d make a measly meal, I think.

But what if we’re the seed or offspring of an ancient and highly advanced race of otherworldly beings as some UFO-ologists suggest? What purpose might we serve as ‘Containers’? Perhaps we are part of a repository called Earth and our bodies the seedlings of stardust—where we are harvested so that our consciousness can be returned to our spirit form, from which we came.

Religion serves as a great check mark against my questions. Christian friends tell me that my thinking and all this talk about aliens isn’t very spiritual or holy. It isn’t? It would seem to me that if God is the Alpha and the Omega, the Almighty, and the ultimate Creator, why would He stop with life on Earth? He would be the God of ALL, including potential life on other planets, no?

We live in a vast cosmos, obstructed by the curse of humanness and our conscious horizon, the latter an inability to comprehend what lies beyond the tyranny of our left-brain or our man-made, not-always-Godly-inspired Bible. But if there is a God, and we are made in His image, I’m glad I have the freedom to wonder about such curious things, things like human containers and Bob Lazar–sort of the way a child might explore a world in which parents set safe boundaries…at least until that day we grow up and take flight, free to explore bizarre but potentially truthful claims without ridicule or interference.

Here’s to you Mr. Lazar, wherever you are!