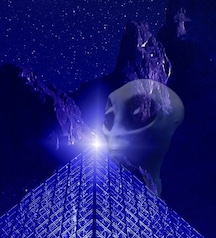 If you’re a bitcoin holder, you’ve probably wondered who the person Satoshi Nakamoto really is. But did you know that some people believe he’s an extraterrestrial, one who created Bitcoin to overthrow human oppressors? Let’s explore the evidence for and against this ‘out there’ theory.

Notably, banks and governments find it difficult to regulate or control cryptocurrency because it is a decentralized and virtually anonymous form of currency exchange. Moreover, Satoshi Nakamoto is allegedly the mastermind behind Bitcoin, where transactions are verified through a mining process. Bitcoin’s largest holders on the globe are MicroStrategy and Tesla.

Consequently, in simple terms, Bitcoin is a digital currency existing outside the traditional financial system. It uses Blockchain as a series of encrypted transactions linked through peer-to-peer networks.

Who is Satoshi Nakamoto?

No one knows for certain. The mysterious creator of Bitcoin, Satoshi Nakamoto, has long been the subject of speculation and mystery. But without a doubt, his (her, it’s) creation of Bitcoin and the first blockchain database available to the public, has global impact.

Some leaked, but as-of-yet unpublished documents, claim Satoshi Nakamoto isn’t a person at all, but a covert private-public sector group aligned with unacknowledged special access projects. The moniker is allegedly a project name.  In fact, governments, particularly those involved in Top Secret projects or operations, typically (and secretly) use cryptocurrency platforms to convert money (i.e. taxpayer dollars), to fund everything from clandestine arms/weapons deals to spies and stealth technology.

It’s certainly within the realm of possibility that government entities created Satoshi Nakamoto as a pseudonym for its encrypted cryptocurrency operation, just as Naval Intelligence created TOR (The Onion Router a.k.a. Deep Web), in the 1990’s to protect its covert agents. TOR was used by a host of intelligence and law enforcement agencies before it became publicly available.

Some people believe Satoshi Nakamoto is an alien who created Bitcoin to help overthrow human oppressors. Much of this hyperbole about Nakamoto being extraterrestrial revolves around his or her (or its) mystery. Some theories tie Nakamoto to Nikola Tesla. Other theories espouse binary code, 0’s and 1’s, as a universal link to potentially pending cosmic transactions. The more ‘down-to Earth’ speculation is that this person, Satoshi Nakamoto, does not exist.

So, who is Satoshi Nakamoto? The answer will likely remain classified. However, the search for this mysterious figure provides an interesting lens to view cryptocurrency and the Blockchain.